There has been a steady drumbeat of complaints lately that Kindle Store prices are going up, up and away now that several major publishers have written “agency model pricing” into their latest ebook contracts with Amazon.

Is it really the case? Well, yes and no. 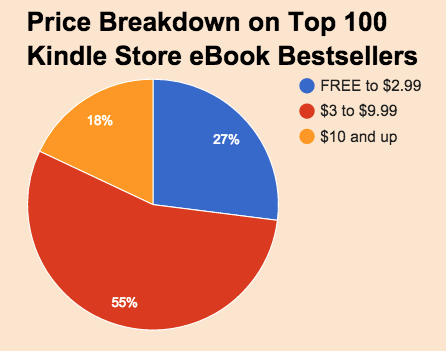 Swell, you say, but when was this? And it’s the answer to that question that’s kind of amazing, because the above chart is an exact reflection of the price breakdown on Kindle bestsellers for three very different date ranges:

How can this possibly be? Well, we all know that figures lie and liars figure, so let’s put aside the YTD figures for now and take a closer look at the two single-day snapshots, using this comparative analysis from BookGorilla. Inside those aggregate figures, there are some fascinating trends:

One might conclude, therefore, that with the latest round of big publisher contracts, the publishers have soundly defeated Amazon.

But one would be wrong.

That’s where our most significant statistical comparison comes in:

In other words, what the big publishers have won in their latest round of contract “victories” over Amazon is the right to price themselves right off the bestseller list.

And just in case you think that all of the least expensive books are self-published dreck, we’ll get into that in greater detail in the future, but the somewhat tautological truth is that these bestselling non-traditional titles are very popular, well-written books by authors with huge followings, including many who have left traditional publishers to go indie and others who have signed contracts and hit the bestseller lists with Amazon’s ever-expanding group of successful publishing imprints.

We’ll look further into the consequences of these trends for readers, authors, and publishers in future posts, and also look more closely at the meaning of the discrepancy between the snapshot sales rankings and the calendar year bestsellers. But let’s stop there for now and remember that bargains, like beauty, are often in the eye of the beholder.

With that in mind, we would love it if you would take 3 minutes to answer 3 questions about what constitutes a bargain in today’s ebook market, the importance of bargains, and how you find your best ebook buys.

Please? It will really help us drill down on how we can best serve you at BookGorilla. And thanks in advance!

Create your own user feedback survey

50 thoughts on “Kindle Store eBook Prices Are Rising … Or Are They?”